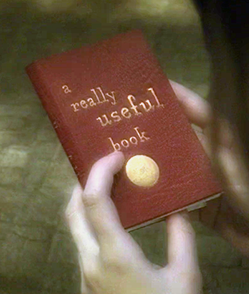 Alice is looking for something. Maybe it's a new outlook on life, help with a homework problem, or maybe just her pen. Bob hands her a book, or suggests a book he doesn't have with him, and suggests she shouldn't take too long to finish with it, and before she can thank him or object, he's out the door.

Cut to Alice suddenly realizing the book in question is a Doorstopper — and Bob expects her to finish in half an hour. It might be a religious text, a very wordy legal document, a dictionary, an obscure scientific (or arcane magic) textbook, the phone book, a catalog with no index, possibly even a Tome of Eldritch Lore or Great Big Book of Everything — anything that normally would take longer than an hour or so to read through.

Later, it's revealed that Bob actually gave her the book:

Compare It May Help You on Your Quest, Magic Feather, and Pocket Protector, where other objects are used for purposes other than for what the audience may have been led to expect. Contrast "Reading Is Cool" Aesop.