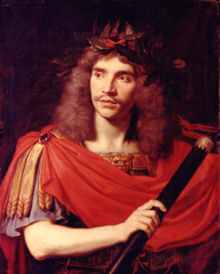 One of the many children of a French royal tapestry-maker, he tried to follow his father's footsteps and later, to become a lawyer, but his heart wasn't in it, and he ended up writing and directing stage plays, and playing in them. He became renowned enough to become a protégé of King Louis XIV, and his name ended up known in the whole kingdom as a result. Heavily influenced by Commedia dell'Arte, his plays are full of slapstick, snark, misunderstandings, and thwarted lovers.

Legend has it he died on the stage, in 1673, playing the main role in The Imaginary Invalid. In fact, he collapsed on stage due to a coughing fit, while playing the hypochondriac of the title. Molière had long suffered from tuberculosis, but insisted on finishing the performance, then was taken home and died there a few hours later.

He's so big in French culture that the language itself is nicknamed "La langue de Molière". In many ways, he's a rough French equivalent to William Shakespeare, though his stature isn't quite as towering, since unlike Shakespeare, Molière wrote more or less only comedies, while the Bard wrote comedies, tragedies, histories, romances, "problem plays" and standalone poems.

The most prestigious French theatre awards, the Molière Awards, are named after him.

Among his works are:

Molière appears in the following works: