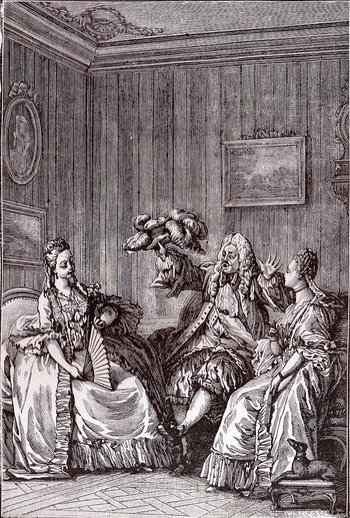 Is Monsieur le Marquis the man of their dreams or what?
The Affected Young Ladies (Les Précieuses ridicules) is a 1659 comedy play in one act by Molière poking fun at the manners of the fashionable set of his time. The play starts with two young suitors, Du Croisy and La Grange, leaving the home of Gorgibus, a bourgeois who has just moved to Paris with his daughter Magdelonnote "Madelon" in modern French spelling; a pet form of "Madeleine" and niece Cathos,note "Catau" in modern French spelling; a pet form of "Catherine" two fashionable young ladies. They are upset because the girls have treated them with scorn, for they do not meet their romanticized notion of what a suitor should be like. After some consultation, they decide to take revenge, by playing a trick on them aiming to teach them of the ways of the real world. They then take their leave of Gorgibus, who confronts Magdelon and Cathos. Upon them confirming that they had sent the suitors away, Gorgibus is incredulous, as he had commanded them to treat said young men as potential husbands. The discussion degrades into a debate over the proper manner of securing a future husband: the girls wish for men who would court them in the manner of fashion; Gorgibus has no understanding or patience for their tastes and affectations and demands that they make a proper match according to his practical considerations as soon as possible. Upon his leaving, Magdelon and Cathos receive an unexpected visit from a gentleman caller – a Marquis de Mascarille. They are delighted to have been noticed, and welcome Mascarille, an outlandishly dressed fellow who seems to display all the manners that they yearn for. Magdelon takes a liking to him, and he is shortly joined by another gentleman caller, the Vicomte de Jodelet, who attracts Cathos. Things move fast and, after making a full acquaintance, they invite some of the girls' neighbors and summon musicians and hold an impromptu dance. Just when it seems like everything is going according to the girls' imagined plan, Du Croisy and La Grange make an unexpected return, and they are angry...at Mascarille and Jodelet...but what have they done to incur the wrath of the former?
Advertisement:

The Affected Young Ladies is a rather scathing farce about fashionable mannerisms and social pretension that, while making its point, ends without offering any kind of real resolution. It was immensely popular at its time and gave Molière a successful start on his return to Paris; not surprisingly, though, it also attracted the ire of some of those whom it satirized.