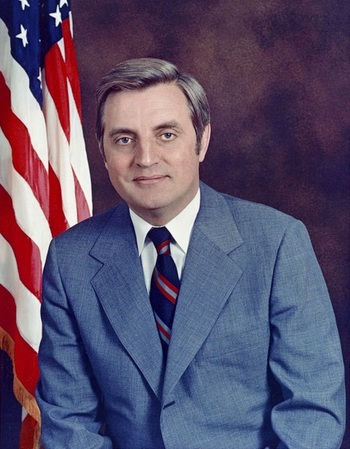 "If you are sure you understand everything that is going on, you are hopelessly confused."
Advertisement:

Walter Frederick Mondale (January 5, 1928 – April 19, 2021) was an American politician, diplomat, and lawyer who served as the 42nd vice president of the United States from 1977 to 1981 under President Jimmy Carter. He later was the Democratic Party's nominee in the 1984 presidential election, but lost to incumbent Ronald Reagan in an Electoral College and popular vote landslide, with Reagan winning 49 states while Mondale only carried his home state of Minnesota and the District of Columbia. His vice presidential nominee, New York Congresswoman Geraldine Ferraro, was the first female vice-presidential nominee of any major party in U.S. history.

Mondale was appointed Minnesota Attorney General in 1960 by Governor Orville Freeman and was elected to a full term as attorney general in 1962 with 60% of the vote. He was appointed to the U.S. Senate upon the resignation of Senator Hubert Humphrey following Humphrey's election as vice president in 1964. Mondale was elected to a full Senate term in 1966 and reelected in 1972.

President Bill Clinton appointed Mondale U.S. Ambassador to Japan in 1993; he retired from that post in 1996. In 2002, Mondale became the last-minute choice of the Minnesota Democratic–Farmer–Labor Party to run for Senate after the death of Democratic Senator Paul Wellstone, who died in a plane crash less than two weeks before the election. Mondale narrowly lost the race to Saint Paul mayor Norm Coleman. Mondale was the oldest living former U.S. vice president from 2018 to 2021, following the death of George H. W. Bush.