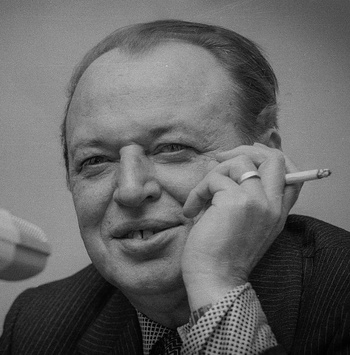 Born in Strasbourg, Alsace, a few years after the area became French again following World War I (it had been German since France lost the Franco-Prussian War), he was a prominent figure (and defender/promoter) of Alsace's particular culture.

Drawing inspiration from Swiss and German popular theatre (the satirical kind especially), he founded a Dinner Theatre in Strasbourg, De Barabli, which performed plays, musical numbers and stand-up comedy entirely in Alsatian, the variant of Alemannisch spoken as dialect in the area for centuries, which has had a rough time with both World Wars and francisation. The cabaret operated from 1946 to 1992.

He also worked in French films in bit roles, and on German television (being fluent in German), making frequent appearances in series such as Tatort and Achtung Zoll!.

A former disciple of Muller, Roger Siffer, created the cabaret La Choucrouterie in Strasbourg in 1984, which still operates and serves as the Spiritual Successor to the Barabli.

Tropes in his body of work include: