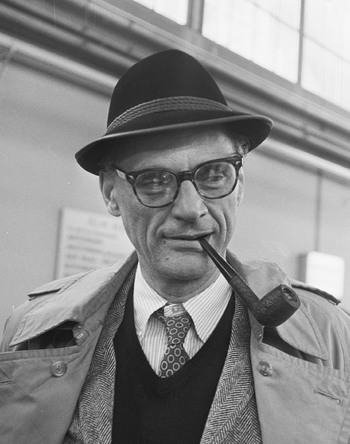 Arthur Asher Miller (October 17, 1915 – February 10, 2005) is considered, alongside Eugene O'Neill and Tennessee Williams, America's greatest playwright. His play Death of a Salesman is generally considered one of the finest dramatic works of the twentieth century. He is also known for his other works such as All My Sons, The Crucible, A View from the Bridge, and After the Fall, as well as the screenplay for The Misfits. Among the general public, Miller is overshadowed by his second marriage to Marilyn Monroe, who acted in The Misfits and who is also the subject of After the Fall. They divorced in 1961 and she would die in the following year. His final play, Finishing the Picture, was about the making of The Misfits from his perspective.

Born in New York to Jewish immigrants, Miller grew up in a lower-middle-class family. He studied English in college and by the time he graduated it was at the height of The Great Depression (aka the "Red Decade"). Miller found work in the New Deal's Theatre Projects (which in addition to Miller also employed Orson Welles, Elia Kazan, Aaron Copland, and several other key figures in the performing arts). Miller was known for being highly political as a writer and playwright. He was inspired by Henrik Ibsen and it was his goal as a playwright to create a "tragedy for the common man".

His plays often castigated capitalism, Conspicuous Consumption, and religious fanaticism which tended to clamp down on the individual. This is best exemplified in his 1949 Tony Award- and Pulitzer Prize-winning play Death of a Salesman, about a man who, overshadowed by the excesses of the free market, is Driven to Suicide. His 1953 play The Crucible, a semi-historical account of the Salem Witch Trials, was an outright critique of McCarthyism and the House Un-American Activities Committee. Naturally, these themes led to Miller getting an appointment from the committee in 1956. note Miller was already under suspicion since his passport to visit London had not been approved by the Federal government and it was after Miller applied for a renewal of his passport that he got an official invitation Miller refused to "name names" and was cited in contempt but he successfully appealed against it and walked out of the hearings.

He remained an active playwright until his final years, though critics generally feel that he peaked early in his career. His most famous production was a tour to China where he produced Death of a Salesman in Peking. He was an enormously influential writer in the second half of the twentieth century, greatly influencing many novelists, playwrights, and filmmakers. His autobiography Timebends is also regarded as one of the best memoirs of the twentieth century.

His daughter Rebecca is a writer and filmmaker in her own right (she made a documentary on her father called Arthur Miller: Writer in 2017). She's married to Daniel Day-Lewis, who starred in (and had met on the set of) the 1996 film adaptation of The Crucible.

Selected Works (on this site)