Theatre / The Doctor in Spite of Himself 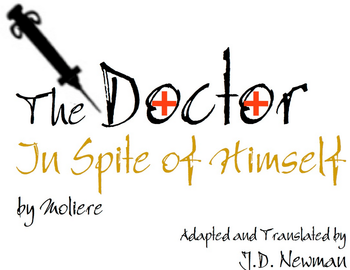 The Doctor in Spite of Himself (Le Médecin malgré lui) is a comedy written by French playwright Molière in 1666.
Advertisement:

Sganarelle is then taken to Géronte, who explains to him that his daughter, Lucinde, has gone mute, and that, so far, nothing he's tried to get her to speak has worked. Lucinde's maid, Jacqueline (also Lucas's wife) remarks that if only Géronte gave her a husband she likes, Lucinde would have no trouble recovering speech. Sganarelle hits on Jacqueline and impresses Géronte by speaking Pig Latin to Lucinde. Later, he is approached by Léandre, Lucinde's lover, who asks for Sganarelle's help to elope with Lucinde. He offers Sganarelle money, and Sganarelle accepts.

Disguised as a pharmacist, Léandre is able to talk to Lucinde while Sganarelle distracts Géronte. Géronte, however, turns his head and sees Lucinde talking. Sganarelle then tells the young couple to run away. Lucas, still mad that Sganarelle hit on his wife, tells Géronte that Sganarelle was in on Lucinde's elopement, and Géronte takes out his wrath on the fake doctor. Then Léandre comes back with the news that his rich uncle has died and he's inherited his fortune. Géronte happily agrees to Lucinde and Léandre's wedding. Sganarelle is released and his healing powers go to his head, while Martine comes back to him, humbled by the thought of being married to such a wise and knowledgeable man.

The Doctor in Spite of Himself provides examples of: