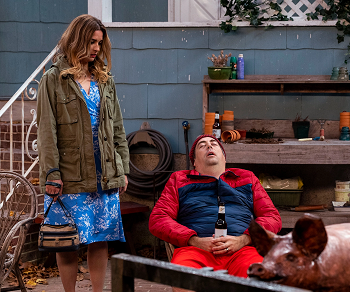 "I know—I've only myself to blame!" she wailed. "My family saw through all those fine promises of yours thirty-five years ago. They warned me you were a loafer and a Lothario, that you'd never lift a finger around the house. Other women have husbands—I've got a cheap facsimile of George Brent, a cluck too lazy to put up a clothesline... I beg you to carry the ashes out of the cellar, to put in a few pothooks, to sweep the leaves off the porch, and what satisfaction do I get? Nyet—all you do is lie there guzzling over your pinups while the moths and silverfish eat us out of house and home."
— S. J. Perelman, "Samson Shorn, or The Slave of Love"
Advertisement:

A husband who is usually seen lounging around at home while his wife does all the housework, rarely seen getting to relax. She often berates him for being lazy.

Sometimes the Lazy Husband is a bit bossy and expects everyone to wait on him, and sometimes he's just more laid-back. His laziness often extends to work as well.

Depending on who is portrayed as more sympathetic, this could overlap with either Women Are Wiser (if the husband being lazy is emphasized, especially in the cases where he's also lazy at work) or Henpecked Husband (if the wife is portrayed as being overly naggy and bossy — especially if she complains whenever he does something, even if he does it right). Also similar to Bumbling Dad, but this is more about the husband-wife dynamic than just focusing on the dad being stupid (and not all lazy husbands are fathers).