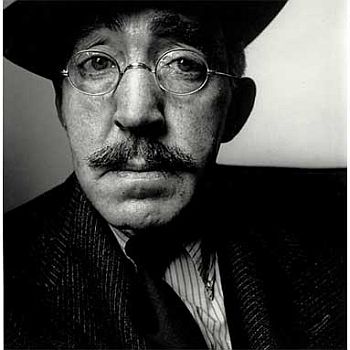 "His nose, broken in childhood by a self-inflicted blow with a hockey stick, has a prehensile tip, ever quick to smell out an insult; at the least suspicion of an affront, Perelman, who has the pride of a Spanish grandee, has been known to whip out his sword-cane and hide in the nearest closet."
"Button-cute, rapier-keen, wafer-thin and pauper-poor is S.J. Perelman, whose tall, stooping figure is better known to the twilit half-world of five continents than to Publishers' Row. That he possesses the power to become invisible to finance companies; that his laboratory is tooled up to manufacture Frankenstein-type monsters on an incredible scale; and that he owns one of the rare mouths in which butter has never melted are legends treasured by every schoolboy."
—S. J. Perelman, describing himself.

Sidney Joseph "S. J." Perelman (1904–1979) was an American humorist whose work appeared in several different media. The Other Wiki puts it bluntly: "Perelman's work is difficult to characterize."

Perelman co-wrote the scripts for the Marx Brothers films Monkey Business (1931) and Horse Feathers (1932) (which should establish his humorist bona fides), and won an Academy Award in 1956 for his screenplay for Around the World in Eighty Days. He also co-wrote (with Ogden Nash) the book to the 1943 Broadway musical One Touch of Venus, to music by Kurt Weill; a few years later Sweet Bye and Bye, a musical which employed the talents of Perelman, Ogden Nash and Al Hirschfeld

, "closed in Philadelphia like a ten-cent mousetrap" (as Perelman put it) before reaching New York.

But it is his humor writing, in The New Yorker and elsewhere, which is commended here. As Andrew Ferguson wrote about Perelman's 1948 book Westward Ha!note A chronicle of him and Hirschfeld traveling around the world on various cargo/passenger ships in that well-known humor compendium, The Wall Street Journal, in 2006: "For sheer verbal virtuosity, for his dizzy manipulation of language, Perelman deserves a place at the top of the trade." His wordplay was reminiscent of James Joyce, but ... well, read the quote above and you'll see.

Perelman could apparently write about anything. For example, an off-hand phrase he stumbled upon in a New York Times Magazine article ("...the late Pandit Motilal Nehru— who sent his laundry to Paris— the young Jawaharlal's British nurse etc. etc.") became his 1955 classic "No Starch in the Dhoti, S'il Vous Plaît", a series of imaginary letters that might have been exchanged in 1903 between an angry Pandit Nehru in India and a Parisian laundryman. One posthumously-published piece ("To Yearn Is Subhuman, To Forestall Divine") references The Texas Chainsaw Massacre (!!).

Those seeking an introduction to Perelman should check out one of the many collections of his work, such as The Most of S.J. Perelman.

S.J. Perelman's works include examples of: