"Before" and "After" Pictures 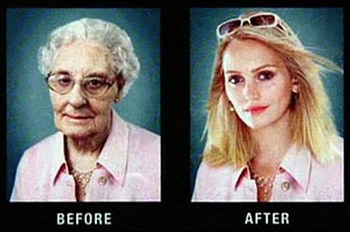 This product will make you look years younger.
"They go round to the houses of parents who aren't very good at being parents [...] and they bring them to a sealed room and they show them like a computer image of what the child will look like at the age of forty, right? And the boy always looks like me. Every week they just put up a giant picture of my face, and the parents recoil in horror! [...] Every week, this hideous future of the child, where the child is miserable, and fat, and bald. And then the parents go out feeling terrible, and then they give them a couple of carrots and they go on bicycle trips round the countryside, and they all have a much better lifestyle. And then they bring the parents back in again, and they do another "This is what your child will look like now!" And suddenly the child is smiling at forty, is slim, and, miraculously, IS NOT BALD."
— Dara O'Briain on the subject in Honey, We're Killing the Kids
Advertisement:

You've got a product that you want to sell. What better way to sell it than showing what a difference it has made to your clients! This is especially true of beauty or health-related products, where the change might be visible. Of course, the change should be made to look as dramatic as possible. And we're not talking about merely showing realistic change - this is advertising!

Before and after photos are a staple of many sorts of advertisement, but especially diet drugs, er, we mean supplements. The need to make the change look as dramatic as possible leads to a number of standard features found in most examples, little cheats to heighten the change.

The pictures are invariably of women, unless the product is designed solely for men. If many sets of B&A pictures are used (either in a single ad or across a series of ads), a few may be men, but most will be women. The person will...

Naturally, you're not supposed to think about how much better the Before picture would look with all the advantages in the After.

When simply jiggering the photograph isn't enough, there are various other ways to make your product look more effective than reality can produce. Using two different models is common, but delves into Blatant Lies.

Cleaning product ads often use the same kinds of tricks to make one product look more effective than another.

Given that this trope is practically universal in the appropriate advertising, only particularly blatant examples should be listed.

This sort of play is especially annoying to the scientifically-oriented-folks in the audience, because, from a true comparison standpoint in science, you would want the before and after pictures to be as close as possible - same lighting, same angle, same facial expression, same clothes. The ad creators don't care, because they aren't going for a true comparison anyway, they're going for one that makes their product look appealing. Can be an Embarrassing Ad Gig for people in the "Before" picture.

Alternative Title(s): Before And After