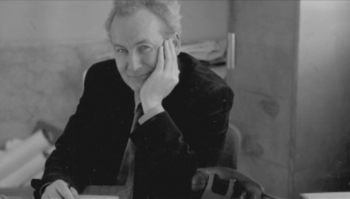 "I am an author-illustrator of children's books - and yet - I must confess I don't do the books for the kids. When I'm working on a book I'm somewhere else - at the circus - or a rustic old farm - or deep in a forest - with no thought of who might read the book or what age group it would appeal to. I write them so I can illustrate them."
Advertisement:

William Bartlett "Bill" Peet (January 29, 1915 - May 11, 2002), was an American story artist, children's book author and illustrator. He discovered a love of drawing and painting at an early age. Although this passion got him in trouble during his school days, it resulted in a long career in animation and literature that shaped the childhoods of countless people.

Peet graduated from the Herron School of Art and Design (where he met his wife Margaret) in Indiana, and initially tried to build a career as a painter. However, after a few early successes and a lot of struggle, he abandoned this dream to search for something steadier. This drove him to Walt Disney and the early Disney company. He began as a lowly in-betweener, filling in the details on Donald Duck in an annex building, a job that he grew to despise so much that he threw a fit and stomped back home.

Fortuitously, this tantrum occurred just as he made an impression with character designs he'd submitted for Pinocchio and, instead of being fired, he was transferred to become a storyboard artist. From there, he rose through the ranks until he became a story artist (someone who was responsible for creating the storyboards), working alongside Walt Disney himself.

He worked on a number of feature films while at Disney, including Snow White and the Seven Dwarfs, Pinocchio, Dumbo, Fantasia, Alice in Wonderland, 101 Dalmatians, The Sword in the Stone, and an early treatment of The Jungle Book (1967). He also directed some short films, including two based off his own ideas.

During this time, Peet began his most well-known work: his series of children's books. Some of the shorts he developed at Disney, like Goliath II and Lambert the Sheepish Lion, were based on ideas he was developing for books. Walt was impressed when Peet pitched these ideas, and told him to go ahead and animate them.

Eventually growing tired of Walt's controlling nature, dramatic mood swings, and temper tantrums, Peet left Disney in 1964 and devoted himself to working as a full-time storybook author and illustrator. His books often drew inspiration from the farms and circuses he visited in childhood. While whimsical, they contained moral lessons about topics such as self confidence, teamwork, and conflict resolution. Peet was also adamant that children learn how to teach themselves, so his text included difficult words and contextual clues so his readers could piece together the words' meanings without needing to ask for help. As a result, they tended to be more wordy and dense than other contemporary children's picture books.

Books written by Bill Peet in order of publication