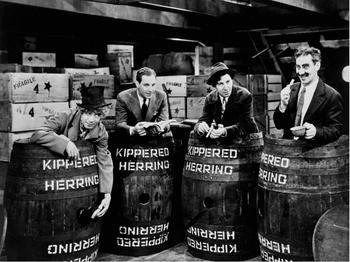 "Ah, this is the only way to travel." note A line Groucho would re-use in Duck Soup.
Advertisement:

The one where Harpo sings.

Much of the story takes place aboard an ocean liner bound for America from Europe. Groucho, Harpo, Chico and Zeppo play four stowaways, who spend much of the journey trying to avoid the ship's captain and his first mate. During and after the journey, the four become involved with an ongoing dispute between rivaling gangsters, which the four brothers solve in their own way. Thelma Todd co-stars as the flirtatious wife of one of the thugs. Much hilarity ensues.

Like other early Marx films such as Horse Feathers and Duck Soup, Monkey Business is much more anarchic and gag-driven than later movies like A Night at the Opera, which heavily feature romance, musical numbers, and, well, plots. This was also the Brothers' first film written expressly for the screen rather than adapted from a stage play; S. J. Perelman was one of the writers.

Not to be confused with Monkey Business, the 1952 Howard Hawks screwball comedy starring Cary Grant, Ginger Rogers and Marilyn Monroe, which involves the accidental invention of a youth potion.