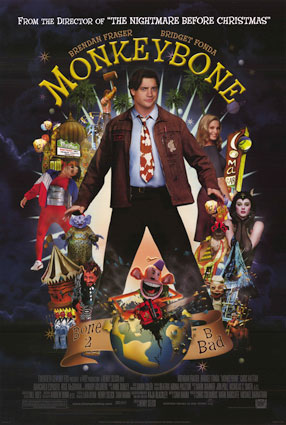 "We welcome you to Down Town and while you're in your coma,
This cheap and cheerful clown town will be your home sweet home-a!"
Advertisement:

Monkeybone is a 2001 film directed by Henry Selick, loosely adapted from the graphic novel Dark Town by Kaja Blackley.

Stu Miley (Brendan Fraser) is a cartoonist, whose life is looking up. He's recently sold the cartoon "Monkeybone" to the network, and he's about to propose to the girl he loves. And then, he went into a coma. He wakes up in Down Town, a whimsical dreamlike place between life and death, where nightmares are big business. And guess who's waiting for him? Monkeybone, his Figment. He's stuck in Down Town, waiting, until Death gives him a ticket out. However, he finds out the plug's about to be pulled on him, so the pair sets out to steal an Exit Pass. However, once they've snatched it from Death, Monkeybone reveals himself as fed up with being just a figment, and, with help of Hypnos, God of Sleep, uses the pass to become Stu in the real world. Hypnos plans to use Stu's body to distribute nightmare juice — a chemical that causes nightmares in people and animals. Hilarity Ensues as Death sends Stu to stop Monkeybone, in the body of a deceased Olympian.

Not to be confused with Monkey Ball.