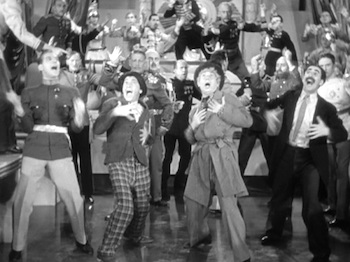 Freedonia: The nation that declares war with a musical number.
"The last man nearly ruined this place, he didn't know what to do with it.
If you think the country's bad off now, just wait till I get through with it!"
—Rufus T. Firefly
Advertisement:

The one that introduced us to "This Means War!".

Duck Soup was the Marx Brothers' fifth film and, in the eyes of the public, in tough competition with A Night at the Opera as the best film they ever made. Directed by Leo McCarey and released in 1933, it was also their final film for Paramount Pictures. It was one of the first films to openly mock the rising fascism in Europe.

The story begins in the vaguely European country of Freedonia, which is nearly bankrupt due to national mismanagement. Wealthy dowager Mrs. Teasdale (Margaret Dumont) agrees to loan the country $20 million, but only if Rufus T. Firefly (Groucho Marx) is appointed ruler. Unfortunately, Ambassador Trentino (Louis Calhern) of the neighboring nation of Sylvania plots to take over Freedonia, and sends his best spies Chicolini (Chico Marx) and Pinky (Harpo Marx) to do his dirty work. But between Firefly's womanizing antics, Firefly's incompetent policies, and Firefly's wanton insults to the Ambassador, Freedonia is soon on the fast track to war with Sylvania. Naturally, Hilarity Ensues throughout all of this.

In the Marx Brothers' repertoire, this movie is notable for being Zeppo Marx's final appearance with the act.

"Of course you know, this means tropes":

"To war, to war, to war we gotta go!" It eventually devolves into a minstrel show. (No Blackface, though.)

"To war, to war, to war we gotta go!" It eventually devolves into a minstrel show. (No Blackface, though.)