Film / A Night at the Opera 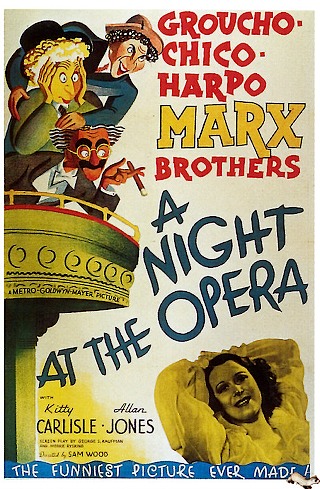 Is this the real life... is this hilarity?
"And now, on with the opera. Let joy be unconfined. Let there be dancing in the streets, drinking in the saloons, and necking in the parlor. Play, Don."
— Otis B. Driftwood
Advertisement:

The one where Groucho says "Of course you know this means war!", this time for real.

A Night at the Opera is a 1935 Marx Brothers film, the first made in their switch from Paramount to MGM. After Duck Soup wasn't as big a hit as their previous movies, the Marx Brothers were in a bit of a career downturn. MGM head Irving Thalberg though had a solution and felt their comedy would appeal more to women and audiences if they focused their chaos against clear bad guys who deserved the mistreatment while also helping a young couple come together. Opera became the largest box-office hit of the Marx Brothers' filmography. Fans have debated for eighty years over whether this or Duck Soup is the Marx Brothers' best film, but most agree it's one of the funniest movies ever.

The plot, as so often in Marx Brothers films, is incidental to the jokes, but it follows the usual pattern. Groucho is Otis B. Driftwood, corrupt business manager to wealthy dowager Mrs. Claypool (Margaret Dumont). He persuades her to invest in the New York Opera Company, allowing them to engage the services of arrogant Italian tenor Rodolfo Lassparri (Walter Woolf King). Heading backstage at an Italian opera house, he meets Lassparri's ex-dresser Tomasso (Harpo) and fast-talking con artist Fiorello (Chico), mistaking the latter for Lassparri's manager and signing a contract with him; the great singer Fiorello claims to represent is actually his friend Ricardo Baroni (Allan Jones), a chorus member. Lassparri and Baroni are also competing for the affections of soprano Rosa Castaldi (Kitty Carlisle). Hilarity Ensues as the characters board an ocean liner to New York; once there, the protagonists scheme to ensure that Lassparri is humiliated, allowing Ricardo to become the New York Opera Company's male lead and be united with Rosa.

This film is associated with the following tropes (and two hard boiled eggs!):