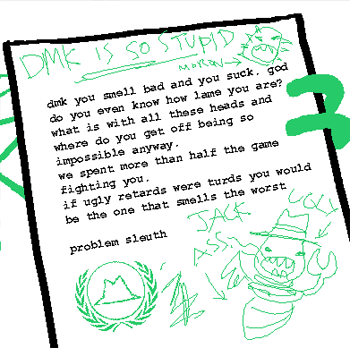 "My favourite thing in the Sun, ever, is the Sun's letters page, 'Dear Sun', where you tell Britain what you think. Not just any thought though, like 'move arm now' or 'eat breakfast this morning' — preferably a thought that might inspire some hatred and antipathy towards people that are slightly different."
— Russell Brand, here

The protagonist has had enough. This is the last straw. That evil empire's in for it now. They're going to... write a strongly worded letter?

An attempt at some brave or heroic action that falls ludicrously short. When played for laughs, it's often applied to timid or nerdy characters who mean well but aren't prepared to do anything useful. When played for drama, it designates a character who ought to be one of the good guys but who places too much faith in "the proper authorities" and will likely hinder the heroes by insisting they do so too.

Often a satire of diplomats. Of course, if the diplomat has a strong country behind them, this actually isn't so weak.

Compare Poke the Poodle, the villainous version. Contrast Disproportionate Retribution as a switcheroo of this.

He writes so many, in fact, that the newspaper does not have the room to print all of them. This prompts another letter on the degeneracy of the newspaper industry.

When Owen and Paige sees Bitsy's smear letter in the newspaper, they don't write a letter to her, they write on a letter from her.

When Owen and Paige sees Bitsy's smear letter in the newspaper, they don't write a letter to her, they write on a letter from her.