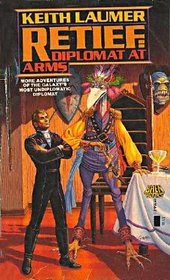 A Science Fiction Comedy series by Keith Laumer which details the adventures of Jame Retief of the Corps Diplomatique Terrestrienne (Exactly What It Says on the Tin). Retief must contend with and solve problems involving a wide variety of bizarre alien species, while outwitting the main rival of the Terrans, the five-eyed, vaguely insectoid Groaci—but his primary obstacle often seems to be the hidebound Vast Bureaucracy he works for. Retief is about the only person who ever gets anything useful done, and then usually only by bending and twisting the rules to their breaking point and beyond. His sidekick-like immediate superior, Ben Magnan, is the only one in the CDT who even seems to recognize Retief's ability to get results.

The series consists of a large number of short stories and a few novels, and was inspired by Laumer's own experiences in the diplomatic corps in Burma, as well as the Cold War politics of the day.