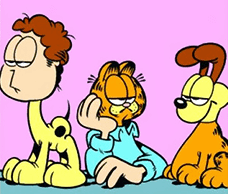 Say Alice and Bob teleport together but suddenly a random teleporting accident happens and Bob ends up with Alice's body, and Alice with Bob's.
Advertisement:

LEGO Body Parts is when someone switches any body part(s) between two or more people. Making this an appendage equivalent to a "Freaky Friday" Flip. Mind you, this trope is not just limited to teleporting accidents. Meat Grinder Surgery is another way this can happen; also, just simply interchanging body parts, which is by far most common.