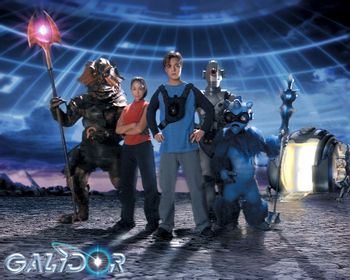 Galidor: Defenders of the Outer Dimension was a science fiction television show created by tween television writer Tom Lynch, produced by CinéGroupe, aired by Fox Kids (the last show to premiere on that programming block before it was replaced by the Fox Box) and later ABC Family in 2002, as well as YTV, and merchandised with its own LEGO action figure line in exchange for Lego partially funding the series.

The show follows Nick Bluetooth, who awakens on his birthday to find a floating tablet that, with the help of his best friend Allegra Zane, leads to an egg-shaped transport that sends them into the Outer Dimension, a series of alternate universes where the evil Gorm seeks to take over. Nick learns he's the one destined to free the realms from Gorm's tyranny, and he has a special power called Glinching. Glinching allows Outer Dimension residents to swap body parts with each other, but Nick can Glinch without having a swapping partner.

Allying with a neurotic genius cyborg, a sage frog-man, and a temperamental short yeti, the teens travel in the "Egg" spacecraft to find the MacGuffin of key fragments that will lead them to the lost city of Galidor, which will provide them the means to save the Outer Dimension, and maybe even solve the mystery of Nick's Disappeared Dad, who it seems had a history with this strange alternate dimension.

The series had a short, two-season run of 26 episodes, dying just seven months after its debut, due in part to the death of the Fox Kids block itself, and in part to its Lego toy line being a huge critical and commercial flop (because its pieces were action-figure–like pieces that couldn't be used with other Lego brands). The series quickly faded into obscurity afterwards, and it has received no official release on DVD or Blu-Ray.

Three video games were also made as tie-ins for the series: a Flash game for the Fox Kids website, and games for the Game Boy Advance and PC. A comic book tie-in was also released.

No relation to Galador, homeworld of ROM: Space Knight.

Tropes used in this TV series and toy line: