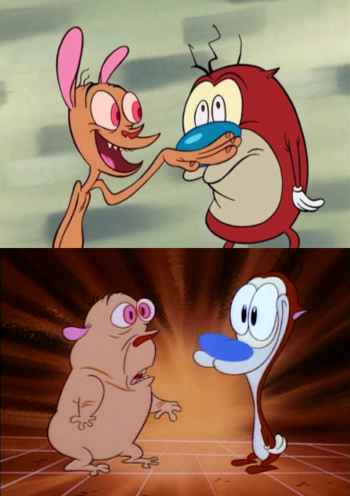 In stories where characters' bodies can be altered through Shapeshifting either voluntary or not, a common requirement for such a transformation is directly exchanging a particular physical attribute with someone else who already has that attribute. This is usually based on some in-universe version of Equivalent Exchange that also explains away Shapeshifter Baggage.

Such trait swapping may involve entire discrete limbs being traded, perhaps in a LEGO Body Parts manner. Other times, the swap involves a more general and/or abstract trait such as height, weight, musculature, skin complexion, or age. More fantastical works may even have two characters changing into each other's species while still recognizably being themselves.

In action-focused works, the characters will likely swap whatever traits will give them an advantage in battle, such as switching with a stronger character's muscles for greater offense or switching with an iron-hided character's carapace for greater defense. More prosaic comedies and dramas instead tend to pair this with characters who want to look more attractive, such as a character with Height Angst stealing the desired height from someone taller or a fat person with Weight Woe transferring the weight to someone thinner. Also, kids who want an Overnight Age-Up may steal the age from adults who get younger as a result, while an Immortality Seeker may steal the youth from someone who undergoes Rapid Aging in response.

This trope can be thought of as "Freaky Friday" Flip meets Partial Transformation. Indeed, the boundary between this and "Freaky Friday" Flip can be blurry if two characters swap enough traits to be mistaken for the other — and the number of traits that need to be swapped for that to happen can be low in certain illustrated and animated works where characters don't look vastly different from each other to begin with.

Often works by way of Liquid Assets. Closely related to Transferred Transformation. The "height swapping" cases are examples of Sizeshifting. If the swapping process involves harming or killing the person with the desired trait, that's Face Stealer. Contrast with Fusion Dance, where two characters become one and merge their physical attributes, and Viral Transformation, where a particular physical trait is passed on without the donor losing it. For the mental equivalent, see Personality Swap (though there's occasional overlap with this trope, especially in stories where The Mind Is a Plaything of the Body).