Film / The Story of a Cheat 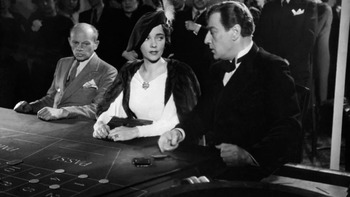 The Story of a Cheat (aka Confessions of a Cheat) (Le Roman d'un tricheur) is a 1936 comedy directed by and starring Sacha Guitry.

The unnamed "Cheat", played by Guitry, is 54 years old, and is writing his memoir. The film plays out in a series of flashbacks as the Cheat remembers his life. At the age of 12 a bizarre accident led to the deaths of everyone in his family but him. After a slimeball uncle takes custody of the boy and steals his inheritance, the Cheat sets out on his own, getting a job as a hotel bellhop. As he ages into adulthood the Cheat has a series of wild adventures. He gets dragged into a plot to assassinate Tsar Nicholas II. He's deflowered by a woman 20 years older than he is. He serves in World War I, barely escaping death in August 1914. He's roped into crime by a mysterious blonde who enlists his help in stealing some jewelry. He becomes a croupier, but a sultry brunette thinks he can rig the roulette wheel. Finally he becomes a card sharp, but more wacky adventures ensue.