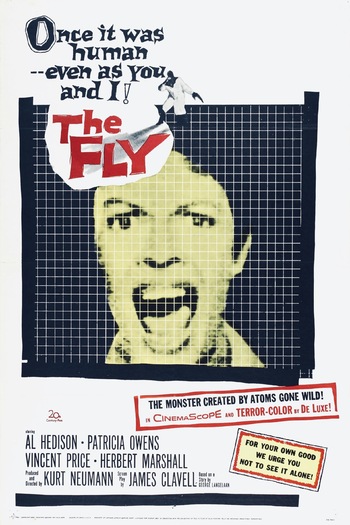 The Fly is a 1958 Sci-Fi Horror movie directed by Kurt Neumann and starring Vincent Price (who, contrary to popular belief, doesn’t play the ill-fated protagonist), David Hedisonnote billed as "Al Hedison" (who does), Patricia Owens, and Herbert Marshall. It has come to be regarded as a Cult Classic.

In Montreal, scientist André Delambre (Hedison) invents a teleportation device. Unfortunately, when he tests it, a housefly happens to be in the chamber with him. Their molecules intermingle and André winds up with the head and arm of the fly, much to the chagrin of his wife Hélène (Owens) and his brother François (Price). Now the family must locate the fly, which has André's head and arm, so that he can properly switch them back before it's too late.

James Clavell, who adapted the screenplay from George Langelaan's short story "The Fly", would later become famous for writing the "Asian Saga" series of novels, such as Shogun and Tai-Pan. This film also began the transition of Vincent Price from character actor to horror movie star, even though he plays André's sympathetic and quietly lovelorn brother François and not André himself, as he surely would have if this movie had been made later in his career.