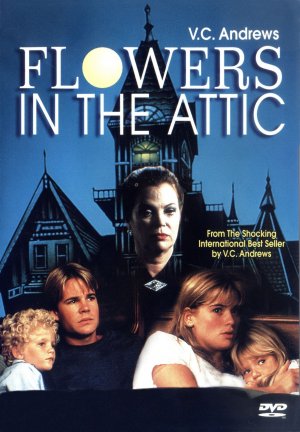 From the outside, the Dollangangers appear to be the perfect family: happily married parents Chris and Corrine and four beautiful children Christopher, Cathy, Carrie, and Cory. But when father Christopher is killed on the night of his thirty-sixth birthday, the family is quickly financially devastated. Lack of savings and Corrine's inability to find work mean that they must sell their possessions and then their house. Soon there is only one place left for them to go.

Corrine takes her four children to Foxworth Hall, her childhood home, to live with her parents. Years ago her father disinherited her over her marriage. She plans to win her way back into his heart so that she can provide for her children. The grandmother permits them to stay on one condition: the children must live in a secluded upstairs room with only the attic for extra space to live and play.

And it all goes downhill from there as physical and emotional abuse, the lure of money, and an entire attic full of ugly family secrets all come into play.

Another film adaptation was produced for the Lifetime network in 2014.