Film / Curse of the Fly 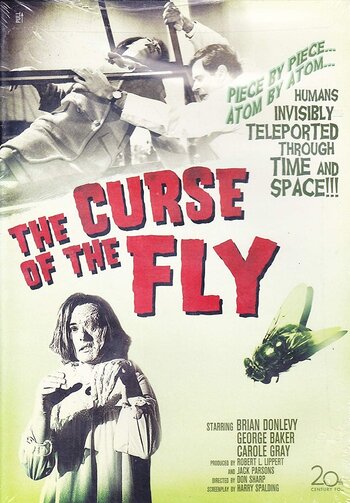 The second sequel to the Sci-Fi Horror classic The Fly, directed by Don Sharp and released in 1965. Unlike the first film and Return of the Fly, there's no Vincent Price in this one and nobody turns into a fly-hybrid.

While driving home, Martin Delambre (George Baker), the grandson of the "turned-into-a-fly" André from the past films, comes across one Patricia Stanley (Carole Gray) running in the night, and gives her a lift since since she barely has any clothes on. They soon fall in love after this little encounter, and he marries her before taking her to his home. Unfortunately for each other, Patricia is an escapee from a mental asylum and Martin and his father Henri (Brian Lonlevy) continue the family tradition of dabbling in experimental teleportation devices that have caused several horrifying accidents already.