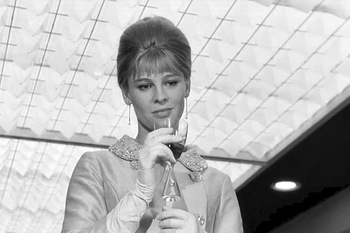 Christie is Diana Scott, a rather amoral model and would-be actress in swinging '60s London. Diana is married to a nice young man named Tony who doesn't interest her very much, and she immediately forgets about him when she meets Robert (Dirk Bogarde), a BBC television journalist. Robert is married but sexy Diana has little trouble seducing him. Eventually Robert leaves his wife for Diana and the two move in together.

Diana begins to tire of domestic life with Robert just as she tired of life with her husband. She meets Miles Brand (Laurence Harvey), an advertising executive and total sleazeball. Diana, while still living with Robert, carries on an affair with louche Miles that gets her a part in a cheesy movie while also introducing her to the weird orgiastic lifestyle of the London and Paris upper crust. She gets pregnant and has an abortion. Eventually Robert has enough and leaves her. Miles isn't one for commitment, but there's a third suitor in the person of Cesare (José Luis de Vilallonga), an insanely wealthy Italian prince. In between, Diana strikes up a close platonic friendship with Malcolm (Roland Curram), a gay fashion photographer.

Christie had been seen in a few supporting roles but this film and Doctor Zhivago, which came out in the same year, made her a huge star. The film was nominated for five Academy Awards, winning for Best Actress (Christie), Original Screenplay (Frederic Raphael), and Black-And-White Costume Design (Julie Harris—no, not that one).