Not Helping Your Case 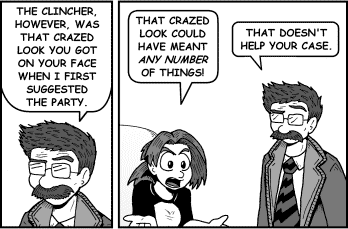 Ellen is just digging herself deeper.
Chidi: So, your job was to defraud the elderly? Sorry, the sick and elderly.
Eleanor: But I was very good at it! I was the top salesperson five years running!
Chidi: Okay, but that's worse. I mean, you... you do get how that's worse, right?
— The Good Place, "Everything is Fine"
Advertisement:

A character is widely distrusted, or maybe even actively disliked, by everyone else in the plot. Even though they're always innocent, this person is blamed for things that they didn't do and is often the first suspect when something bad does happen.

Unfortunately, rather than make an effort to convince people of their innocence and good intentions, the character rebels and acts out, sometimes feeling they have nothing to lose by doing so; maybe even committing an actual crime in the process. When people discover the crime, that confirms their suspicions and "proves" to them that, yes, this person was really that bad all along.

For added ironic flavor, the newly-criminal character may be busted just as the others come around and start to believe their original claim — giving the cynic of the group something to snark about — "Well, I guess you're right, chumps, they really aren't a thief... they're just a graverobber."

Compare I Resemble That Remark!. Somewhat related are You Have to Believe Me! (a character makes bizarre statements in a hysterical tone), Digging Yourself Deeper (the character tries to sound less creepy by justifying the original creepy remark), Then Let Me Be Evil (the character decides to live down to people's low expectations) and Sticky Fingers (habitual petty theft puts the character under a constant aura of suspicion). Contrast with Wrongful Accusation Insurance, where the character is not implicated for crimes committed while trying to clear their name. The tropes may overlap, though, if the character is called out for their crimes as they happen, yet unceremoniously pardoned after their name is cleared. Not to be confused with Don't Shoot the Message. For moments where someone or something else doesn't help your case, see Contrived Coincidence and Instantly Proven Wrong.

After some Courtroom Antics aimed at showing her innocent (which Eureka sabotages at every point), when the trial is reluctantly concluded, Eureka tells them where the missing piglet trapped itself. Trying to get away from her attempts to eat it. And "Eureka was much surprised to find herself in disgrace; but she was, in spite of the fact that she had not eaten the piglet."