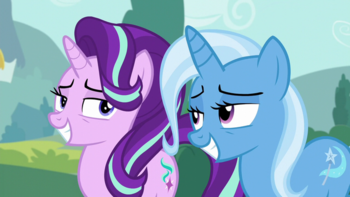 Silly Starlight, Trix are for... oh, wait a minute.
"Please, Twilight! I know you're trying to help, but I need to make friends on my own if I'm going to become a better pony."
— Starlight Glimmer
Written by Nick Confalone

Twilight Sparkle and Starlight Glimmer are busily setting a table in the castle for a dinner with Princess Celestia that night. Starlight is surprised to see that Twilight has laid out four places at the table; the latter explains that, as a test, she wants Starlight to go to Ponyville and make a new friend to invite to to the meal. A nervous Starlight heads to town, where the rest of the Mane Six try to help her befriend various other ponies, only to run into trouble: Pinkie Pie introduces her to Mrs. Cake, and an overeager Starlight accidentally outdoes the baker with her magic; Applejack suggests Big Macintosh, only for Starlight to turn him into an uncontrollable Motor Mouth with a spell; Rarity promises to make Starlight a new outfit to help her find friends — a process that will take three weeks; Rainbow Dash goes to get Spitfire of the Wonderbolts, but Starlight shocks the speedy pony by admitting she's never heard of them; and finally, Starlight meets Angel Bunny (who loves her), but realizes that he doesn't really count. Determined not to let stress scare off other ponies further, Starlight decides to head to the spa for a quick facial to calm down. While there, she complains aloud about her situation, and another pony in a mud mask chimes in, admitting that she's struggled with people judging her for past actions as well. Starlight eagerly rushes to the castle to show off her new friend to Twilight, describing her as "great and powerful" — and that's when Trixie walks through the door with a smirk on her face.

Twilight is immediately distrustful of Trixie's intentions, but Trixie says she's only in Ponyville on tour with her new magic show. Starlight points out that Twilight said she could choose any pony as her friend, and the latter reluctantly lets the two continue spending time together. As Trixie sets up for her magic show with Starlight's help, other ponies come by and make it clear that they remember Trixie's cruel actions from the last time she was in Ponyville. The magician complains about the difficulty of getting second chances from others, and Starlight agrees, strengthening the bond between the two. When they go to unload Trixie's wagon, Starlight is surprised to see Twilight spying on her from a nearby bush. Twilight tries to get Starlight to consider choosing someone else, including DJ Pon-3, Derpy Hooves, and Cranky Doodle Donkey, to be her guest at the dinner; an angry Starlight accuses Twilight of not trusting her and runs off to help Trixie. She brings up the tension between the alicorn and the magician, with Trixie admitting that most of her actions toward Twilight were Driven by Envy — Twilight is so good at everything that Trixie is compelled to find just one thing to do better. Starlight points out that Trixie is an excellent stage magician, and the latter admits that she's not skilled enough to perform a trick perfected by the great Hoofdini: the "Moonshot Manticore Mouth Dive," which involves shooting oneself out of a cannon directly into the mouth of a hungry manticore, only to appear unharmed in a box nearby. Starlight offers to become Trixie's assistant and use a teleportation spell to help with the trick, but then realizes that she can't perform in the show that night because of her dinner, and is visibly upset when Trixie laments this fact.

At the dinner, Twilight nervously introduces DJ Pon-3, Derpy Hooves, and Cranky Doodle Donkey to an annoyed Celestia, with Starlight nowhere to be seen. The alicorn runs into town to find her pupil, and discovers her helping Trixie prep for her show. While Twilight and Starlight fight, Trixie brags that the latter chose to help her with the show as opposed to attending the dinner with Celestia, and she has therefore finally beaten Twilight at something. A shocked Starlight asks if Trixie just befriended her to get back at Twilight, and in the heat of the moment, the magician agrees, though she quickly explains that she has developed a genuine connection with her. Starlight runs out in tears, and Twilight is prepared to give Trixie a tongue-lashing — only to discover Trixie crying herself as she claims that she's in no way at all upset for losing her first friend ever. Later, a decidedly less-than-enthused Trixie introduces the Moonshot Manticore Mouth Dive while Starlight watches from a nearby hill. Twilight approaches her pupil and admits that she was wrong to try to control Starlight, suggesting that she give Trixie a second chance. At the last second, Starlight rushes backstage and warps Trixie from the manticore's mouth, completing the trick to a thrilled audience. Backstage, Twilight sincerely compliments Trixie on a job well done, and the magician admits that she couldn't have done it without her "great and powerful assistant... and best friend" Starlight. All has ended happily... except for the dinner party, where Celestia is still waiting for Twilight and growing increasingly frustrated by Cranky's invasive questions.

Cue credits music in the style of a Scott Joplin piano rag.