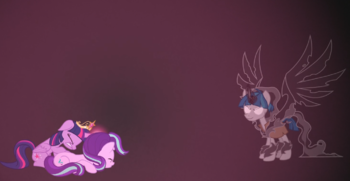 Confronting the shadows of the past.
"Fight the darkness, Stygian! You don't need it anymore! Revenge isn't what you want! Friendship is!"
— Twilight Sparkle
Story by Josh Haber
Written by Josh Haber & Nicole Dubuc
Advertisement:

Everypony reconvenes in the map room of Twilight's castle. Star Swirl says he recognizes the magic that powers the map (and the castle itself) and casts a spell on it, causing a projection of the Tree of Harmony to appear in place of the map. The magic that spawned the map and castle is a result of the seed of hope that the Pillars of Equestria had planted over a millennium before, prior to sealing the Pony of Shadows. This in turn means that the Elements of Harmony were originally spawned from the Pillars of Equestria's own elemental alignments; hope, strength, beauty, bravery, healing, and sorcery and over time these elements became the spirit of the land itself.

Meanwhile, the remaining ponies travel to Manehattan only to find that the land is not nearly as dark as it once was, thanks to the advancements and spread of civilization. Returning to Twilight's castle, Star Swirl concedes that the Pony of Shadows isn't as likely to find a place to recharge as he would if he were living in his own time. Fluttershy asks Meadowbrook if they can find a solution that won't involve sealing the Pillars of Equestria, but she doesn't believe so until Twilight arrives with her own sealing spell.

Star Swirl blows off Twilight's spell, due to his lack of confidence in Twilight, following her recklessness that resulted in the release of the Pony of Shadows, but her friends come to her aid and back her up, insisting Star Swirl at least read the spell before disregarding it. Star Swirl concedes the point, but Sunburst points out that they still don't know where the Pony of Shadows is. However, he speaks too soon as the map calls all of the Mane Six to a region known as the "Hollow Shades". Once more, Starlight raises her concern that there must be a less harsh way to deal with the Pony of Shadows, but Star Swirl says that talk will not be the solution to their predicament and works with Twilight and Sunburst to improve Twilight's initial work while the rest ready themselves to battle the Pony of Shadows.

Starlight approaches the other Pillars of Equestria and asks what drove the Pony of Shadows to become as he is. Rockhoof recounts that they were first brought together by a unicorn, more a scholar than a hero, by the name of "Stygian" to combat a great evil that was blighting the land. However, jealousy drove him to steal sacred objects from the Pillars of Equestria in order to imbue himself with the powers of the Pillars, the action of which drove a rift between the Pillars and Stygian. Though they expected to mend things with Stygian, the next time they saw him he had been consumed by a shadowy presence.

Star Swirl continues to insist that the darkness that consumed Stygian has no rational mind and must be banished for the good of Equestria. Starlight counters that the map wouldn't summon the six to resolve anything except a friendship problem, questioning how this instance is any different. Star Swirl refutes the claim, causing Starlight to lose her respect for Star Swirl. As part of the improved sealing spell, the ponies visit the Tree of Harmony in order to reclaim the elements they surrendered to it.

Star Swirl orders Twilight (who is hesitating) to finish the job but just then, a pony emerges from inside the Pony of Shadows' black body. Twilight pursues the pony inside and finds Stygian within. Stygian explains that he only sought the Pillars' respect. Despite being the founder of the group and the tactician behind the Pillars' strategies, his lack of magical ability or physical strength caused him to be overlooked. He did not intend to steal their artifacts but rather copy them, drawing strength from his duplication and becoming able to assist them on the battlefield. But when the Pillars threw him out of the group, he came to believe that they only cared about keeping the glory all to themselves. This misunderstanding was what drove Stygian away and, in his despair, a mysterious evil force spoke to him, offering him power, and it came at the cost of corrupting his mind. Starlight, Sunburst and the rest of the Mane Six hear and listen to everything Stygian is saying, as do Star Swirl and the Pillars, who soon realize their mistake — Stygian was trying be one of them and they should've listened before he was corrupted.

Starlight joins them inside the Pony of Shadows in order to reason with Stygian that she too had corrupt magic and was vengeful towards Twilight and her friends before she changed, but he rejects it (or rather the shadows possessing him do) as the darkness will not give in. Not willing to give up, Twilight attempts to forcibly separate Stygian from the Pony of Shadows in order to save them. Together with Starlight, they try to drag Stygian out by his hooves but require more magic energy to do so. Star Swirl, finally seeing his error and now wanting to save Stygian instead of banish him, has everypony redirect their magical energy to forcing Stygian and the Pony of Shadows apart instead of pushing them both through the portal. They succeed and the shadowy energy creature gets sucked into the portal without Stygian.

The team climb out of the large hole leading to the Well of Shade and are surprised to find that they still have the Elements of Harmony, with Fluttershy suggesting that their use of the elements to save Stygian instead of doom him was the reason they didn't disappear.

Star Swirl pulls Stygian out of the hole, reconciles with him and expresses his regret for believing Stygian betrayed him and the Pillars. He also gives an apology to Twilight for not seeing the magic potential of friendship, which goes a long way toward repairing the damage Star Swirl did by treating Twilight so brusquely and angrily putting her down over the course of the adventure.

Star Swirl also is called out for dismissing and disrespecting Starlight's suggestions that there was a solution other than banishment and the map only ever calls for solving friendship problems. Star Swirl admits he owes many apologies and has the good grace to look abashed for dismissing Twilight and Starlight, insisting only on his "my way or the highway" approach.

The Mane Six's cutie marks glow, signifying a successful friendship problem solved and everypony returns to Canterlot, where Star Swirl reunites with Celestia and Luna. Princess Celestia invites Star Swirl to stay in Canterlot and resume teaching, but Star Swirl declines, wanting to explore the vastly changed Equestria before deciding where to settle down; Stygian and the Pillars also feel this way. Before they go, the rest of the ponies all join in a group hug.

Twilight herself thanks Starlight for reminding her of the Magic of Friendship when her idolization of Star Swirl blinded her to all else, and the two happily hug.