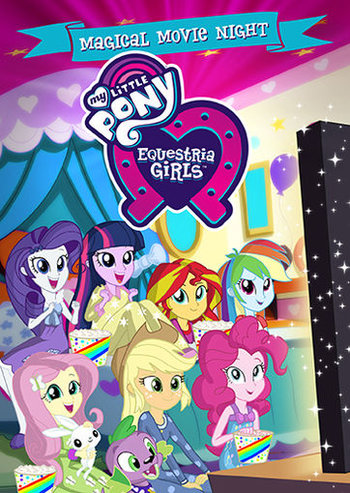 Dance the night away,
All our friends right by our side!
Dear Princess Twilight, tonight's the night of the big movie premiere. All my friends are really excited, and I should be, too. Except I can't seem to keep my mind on anything other than our new powers, and the rogue magic that's loose in this world, and how scary but exhilarating it all is. How does it work? How can we be prepared for it? When will it show up again? Well, you see the problem.
— Sunset Shimmer
Advertisement:

The specials aired on Discovery Family on June 24th, July 1st and July 8th, respectively, as part of the channel's Summer programming. The title refers to the series' single-DVD collection to be released on August 8, 2017. A novelization, titled My Little Pony: Equestria Girls: Magic, Magic Everywhere! was released on June 6th 2017. The compilation was released as "Tales of Canterlot High" on Netflix on October 1st, 2017.

The specials are followed by a set of "Summertime Shorts", which aired from July 30th to August 27th 2017.

Rarity is over-the-top horrified to see that the Shadowbolts stole her dance video idea.

Rarity is over-the-top horrified to see that the Shadowbolts stole her dance video idea.