Literature / The Daring Do Adventure Collection

The Daring Do Adventure Collection is an officially licensed set of three books, later sold as separate titles, set in the My Little Pony: Friendship Is Magic universe written by A.K. Yearling, but ghostwritten by G.M. Berrow, author of previous chapter books based on the TV series. The books serve as a Defictionalization of the TV series' book series starring the titular adventurous pegasus, Daring Do. 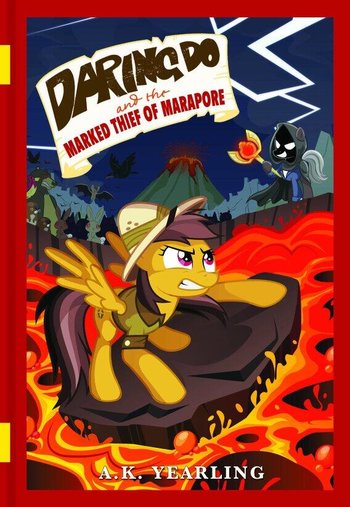 After returning from a previous adventure, Daring Do finds a mysterious stranger at her house asking her to help the ponies of Marapore before leaving behind an encyclopedia (a rare one missing from Daring Do's personal collection). She quickly realizes that the Flankara Relics, three powerful artifacts that protect the Tricorner Villages from the volcano of Mt. Vehoovius has been stolen. With the volcano set to erupt in a few days, can Daring Do capture the thief and retrieve the artifacts before it's too late?

Daring Do and the Eternal Flower 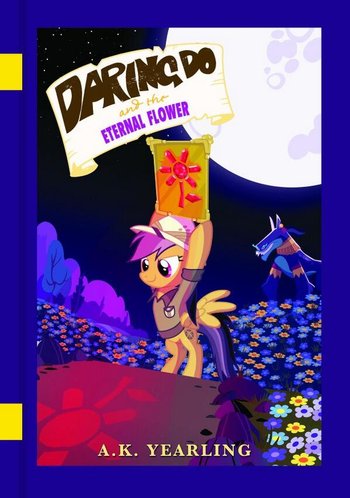 "Nothing lasts forever...or does it?"

Upon learning about the Eternal Flower, a legendary flower capable of granting immortality to those who drink its nectar, Daring Do goes to a banquet held by the Equestrian Botanical Society. She quickly learns, however, that she's not the only one searching for it. Her uncle Gallant True, the pony who influenced her life as an adventurer, has been searching for it for years and has gone missing, as is Ahuizotl, who is eager to use the flower to gain immortality for himself. With the chance to stop Ahuizotl and see her uncle once more, this is one adventure Daring Do cannot pass up.

Daring Do and the Forbidden City of Clouds 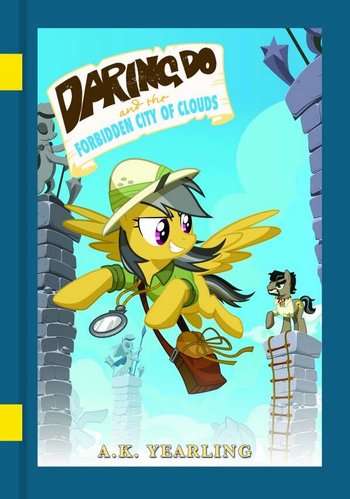 "If a treasure cannot be seen...does it even exist?"

Daring Do visits Professor A.B. Ravenhoof, an ex-adventurer and close friend, to give to him a legendary artifact that she retrieved from a previous adventure. During a conversation with Ravenhoof, Daring learns about the city of Cirrostrata, a legendary city that exists amongst the clouds but has never been seen by anypony with the exception of a close colleague of his. The naturally curious Daring Do sets out at once to find this pony and see this city for herself.