Series / On Our Own 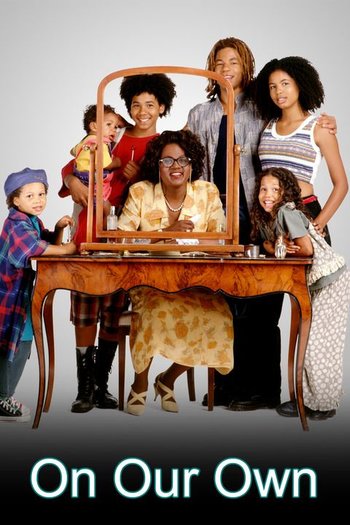 On Our Own was a short-lived sitcom produced by Miller-Boyett Productions (creators of Full House and Family Matters) that ran on ABC's TGiF from 1994 to 1995. The series was a Dom Com set in St. Louis, Missouri, about seven siblings trying to stay together as a family after their parents die in a car crash. Ralph Harris played Josh Jerrico, the eldest brother, and the children were played by the six Smollet siblings (Jo Jo, Jazz, Jussie, Jurnee, Jake, and Jocqui). There was also a family pet bulldog named Jinx that received And Starring status.

In order to stay together, Josh decides to impersonate his Aunt Jelcinda and dresses in full drag (think Madea before Madea) in order to fool social worker Alana Michaels (Kimberley Kates) who quickly sees through the ruse. But she agrees to keeps their secret to avoid them getting split up, but her boss Mr. Gordon Ormsby (Roger Aaron Brown) being enamored by Aunt Jelcinda further complicates things.

After low ratings, the series was retooled, and lost the characters of Alana and Gordon and Josh gained full custody of the kids, eliminating the need for him to go in drag. T'Keyah Crystal Keymáh was brought in as a Love Interest to Josh, and Cool Big Sis to the two girls, but it wasn't enough and the show was cancelled.

Notable for showcasing the Smollett performing family, who still work in the entertainment industry in various roles, with Jussie and Jurnee being the most high-profile members.

Not to be confused for the film On Our Own.