Recap / My Little Pony: Friendship Is Magic S2 E16 "Read It and Weep" 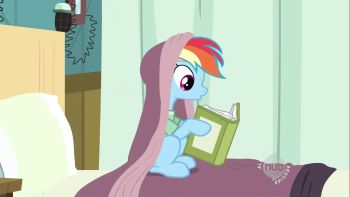 Take a look, she's in a book, a Reading Rainbow!
Twilight Sparkle: I think you'll like Daring [Do], she's a lot like you! Adventurous, fierce, and undeniably, unquestionably unstoppable!
Written by Cindy Morrow
Advertisement:

Twilight Sparkle finds Pinkie Pie and Rarity watching Rainbow Dash performing a new stunt flying routine. The girls are impressed... but less so, and even a little worried, when Rainbow Dash suddenly crashes.

Rainbow Dash awakens in the hospital, with her concerned friends huddling around her bed and one wing in bandages. Sentenced to a few days' bed rest, Dash is convinced she'll be bored to tears with nothing to do and nopony to talk to except her room-mate, who's in a full-body cast and obviously not the best conversationalist. This gives Twilight the idea to pluck a book from a passing book cart, and recommend it to Rainbow Dash. Despite all her friends insisting that she'll enjoy the adventurous tale of Daring Do and the Quest for the Sapphire Statue and that reading is something anypony can enjoy, Dash refuses to give the book a try.

Advertisement:
Rainbow Dash: No thanks! I so don't read. I'm a world-class athlete! Reading's for egg-heads like you, Twilight... no offense, but I am not reading. It's undeniably, unquestionably uncool!

After her friends leave, however, the tedium of her hospital stay quickly gets to Rainbow Dash, and she starts reading. She's quick to identify with the adventurous Pegasus protagonist, and is taken in by the description of Daring Do's escape from a pack of ferocious wild cats.

Dash reads on about Daring Do navigating the many traps of an ancient temple, and finding the treasure she's been seeking, the titular Sapphire Statue... only to be pulled back into reality by the arrival of Twilight and Fluttershy, who've brought her favorite board game and offer to play it. Rainbow Dash agrees to play, but ends up throwing the game in order to get it over with as soon as possible so she can go back to reading her book without revealing to her friends that she's into reading after all.

Daring Do manages to navigate the traps guarding the treasure, and snatches it from its pedestal... only to set off another big trap that causes the room to fill with lava! She manages to escape by climbing to a hole in the roof using collapsing pillars, but just when she thinks she's in the clear she's confronted by the evil Ahuizotl, who also has designs on the statue... and Pinkie Pie's voice?

No, it's just Dash being interrupted by her friends again, this time by Pinkie, Applejack and Rarity. Fortunately, it's also dinner time, and Dash manages to drive them off with her messy eating so she can get back to the story.

Daring Do puts up a brave fight against Ahuizotl and his feline minions but is captured and tied to an ancient death trap: spiked walls closing in, spiders, snakes, and sand flooding the room for good measure. Unfortunately, Dash gets interrupted again, this time by the doctor. Not only has Rainbow Dash been up all night reading her book, she's being discharged from the hospital soon — right now, in fact.

Desperate to see how the cliffhanger is resolved, but equally desperate to keep her new love of reading a secret, Rainbow Dash tries to get back into the hospital by playing sick. When that doesn't work, she dresses up in a black cat-suit and sneaks into the hospital, slipping under the bed of her former hospital room (which is occupied by a new patient). She manages to find the book, but before she can get to reading the hospital staff is alerted to her presence!

A frantic - and eerily familiar - chase ensues, which ends when Rainbow Dash is cornered outside Twilight's library. Confronted by the hospital staff and her friends, Rainbow Dash is forced to admit that she had enjoyed the book after all and needed to know how it ended.

Twilight Sparkle: Wow... I knew the book was good, but I didn't know it could drive a pony to petty theft.
Rainbow Dash: "Good"? Try "awesomely amazing"! That book is undeniably, unquestionably un-put-down-able!

Fortunately, Twilight is willing to loan Rainbow Dash her copy of the book, along with the other books in the Daring Do series. Rainbow Dash admits she's learned that you shouldn't knock something until you've tried it, and that you shouldn't be ashamed of your interests... though she's too busy rushing off to finish Quest for the Sapphire Statue to really put it into the form of a letter to Princess Celestia.

Dash finally finishes her story, reading how Daring Do manages to escape the death trap through judicious use of her explorer hat, then snatch the Sapphire Statue out of the paws of the evil Ahuizotl and escape. Which means now Rainbow Dash is free to start the next book in the series, Daring Do and the Griffon's Goblet.

The Daring Do book seriesnote the non-canon, entirely-fan-made one has an actual page on here now!

The Book Within the Show Daring Do and the Quest for the Sapphire Stone provides examples of:

Note: For an in-universe trope page of the series, click here.

Rainbow Dash: And so, with Ahuizotl defeated and the Sapphire Statue secured, the world was safe and sound once again. Thanks to Daring Do!
(set book aside, picks up another)
Rainbow Dash: Daring Do and the Griffon's Goblet... Awesome! /)^3^(\