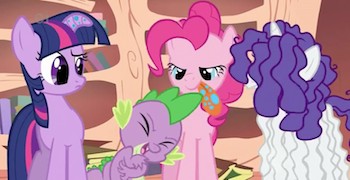 Think it's bad now? Wait until you hear ''Flutterguy''!
Pinkie Pie: And that wicked Enchantress, Zecora, lives there doing her evil... stuff! She's so evil; I even wrote a song about her!
Rainbow Dash: Here we go...
Written by Amy Keating Rogers
Advertisement:

Taking a walk through Ponyville, Twilight discovers her friends and neighbors hiding from Zecora, a mysterious zebra who lives in the Everfree Forest, visits town about once a month, and is rumored to be a witch. Twilight is skeptical, as is Applejack's little sister Apple Bloom, who decides to tail Zecora and see if the rumors are true. Applejack and the rest chase her down before Apple Bloom gets herself in trouble, and meet Zecora herself at the edge of the Everfree Forest, near a patch of blue-flowered vines. The zebra shouts, "Beware, beware, you pony folk! Those leaves of blue are not a joke!" and retreats into the forest, leaving everyone but Apple Bloom and the skeptical Twilight convinced that Zecora has put a curse on them.

The next morning, Twilight and her friends find themselves afflicted by a series of bizarre ailments: Twilight Sparkle's horn is limp and covered in blue spots, sapping her magical powersnote maybe... she was able to use her brush just fine before noticing it, and probably didn't bother afterward; Pinkie Pie is rendered incoherent by a massively swollen tongue; Rainbow Dash's wings are inverted and moved down to her stomach, leaving her unable to fly straight; Rarity's mane and pelt have become inconveniently long and matted; Applejack is reduced to a minuscule size; and Fluttershy (to her great embarrassment) now speaks in a deep, masculine voice.

Twilight tries to ignore her friends' insistence that this is Zecora's curse and find a rational explanation for their condition, dismissing Spike's suggestion of looking in a book on "Supernaturals". Apple Bloom, who blames herself for what happened, wanders off to find Zecora again (with the tiny Applejack tagging along). The Mane Five rush after them, but Apple Bloom easily ditches her not-so-big sister, and the ponies' various impairments make finding Apple Bloom in the Everfree Forest harder than usual.

The gang eventually regroups at Zecora's hut to see the zebra mixing a large cauldron and chanting strange words. By now, even Twilight is convinced Zecora really did put a curse on everyone, and is now plotting to make stew out of Apple Bloom. They confront Zecora, spilling her brew in the process, and demand to know what happened to Apple Bloom.

Turns out she's right behind them, safe and sound. Twilight's original guess was right: there was no curse. Their condition is the result of exposure to the blue-flowered vines they were standing in earlier, which are actually "poison joke", a magical plant with a weird sense of humor. Zecora was actually working on a cure, out of a copy of the same book Twilight had earlier rejected: it seems Twilight had misread the title of "Super Naturals", a book on natural home-remedies. With the lesson in not judging a book by its cover doubly learned, Zecora offers to mix up a new batch of the poison joke treatment for the grateful ponies... once they convince the other citizens of Ponyville that Zecora is not only harmless, but actually quite friendly, allowing her to buy the last few ingredients she needs in town. Now a welcome member of the Ponyville community, Zecora gladly allows the Ponyville residents to use her remedy for themselves.

Example of:
No Sense of Personal Space