Recap / My Little Pony: Friendship Is Magic S1 E10 "Swarm of the Century" 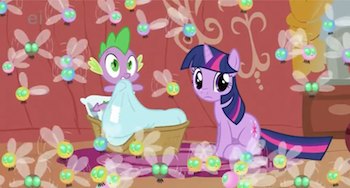 Tribbles? Amateurs.
Zecora: Tales of crops and harvests consumed. If these creatures are in Ponyville... you're doomed.
Written by M.A. Larson
Advertisement:

Fluttershy is wandering around near the Everfree Forest, picking flowers to present to Princess Celestia for her upcoming visit the next day. However, as she's about to head back to Ponyville, she's startled by a tiny, adorable, fly-like creature. She offers it an apple, only for it to eat an entire bucketful in an instant. Her reaction? Fawn over its adorableness and take it with her to show off to her friends.

Meanwhile, back in Ponyville, Twilight Sparkle is overseeing preparations, making sure everything is proceeding flawlessly. Which, barring a few details, seems to be going quite well. However, when she checks on the progress of the food over at the Sugarcube Corner, she is dismayed to find Pinkie Pie devouring everything under the pretense of taste-testing. Twilight's about to give her a piece of her mind when Fluttershy barges in. Fluttershy shows them her new pet, only to find that two others like it have shown up out of nowhere. Twilight's more than happy to adopt one, but Pinkie is surprisingly intolerant:

Advertisement:
Pinkie Pie: Ugh! A Parasprite? Are you kidding!?

Confused, Fluttershy and Twilight ask why she doesn't want one, only for Pinkie to declare "Now I have to go find a trombone!" Twilight dismisses this as "typical Pinkie Pie" behavior.

Moving on, Twilight checks in at Rarity's shop to see how the outfits are coming along, and finds Rainbow Dash there, reluctantly modeling. Twilight's new pet shows itself and...wait a minute; there's three of them again! Fortunately, Rainbow Dash and Rarity are more than willing to each take one for themselves. Pinkie bursts in, asking for help in finding an accordion, but leaves in a huff when the girls are too overwhelmed by the creatures' inherent cuteness to give her any heed.

Nothing major happens for the rest of the day, and everyone goes to sleep for some well-deserved rest for tomorrow's celebration...

However, the next day, everyone's in for a rude awakening when they find that their new pets have greatly multiplied overnight. They proceed to make a mess of Twilight's room, get a little too affectionate with Rainbow Dash, and gross out Rarity by showing her how they reproduce. Pinkie shows up again, but soon runs off in anger after remarking that she's going to need a lot more instruments and nopony will join her. Twilight, Rarity, and Rainbow Dash soon meet up; they head to Fluttershy's to see if she could help keep them under control, only to find her under a flood of parasprites.

Fluttershy: I've tried everything I know! I've tried begging, and pleading, and beseeching, and asking politely, and...

Twilight begins to panic, fearing the worst if they can't get the bugs under control before Celestia arrives. Applejack then shows up with a cart full of apples (which gets promptly eaten), and soon joins their cause. They manage to herd the swarm into the Everfree forest, only to find another swarm at Fluttershy's because she had secretly kept one for herself. Rainbow Dash generates a tornado to whisk them away, but it gets interrupted when Pinkie's new cymbals get sucked in, raining the insects over Ponyville. Tensions escalate when Pinkie Pie is obsessed with finding instruments instead of helping the others, resulting in the herd outright ignoring her due to Princess Celestia's impending arrival, making her furious.

Over in Ponyville, the bugs have descended and are eating every food and crop, causing Applejack to run back home to protect her farm. Twilight casts a spell on the creatures to get them to stop eating the food. It works, but now they've started eating everything else instead... buckets... tents... lampposts... everything. Panicking, the ponies break off to defend their homes, only to find themselves helpless against the horde. Twilight snatches a parasprite and rushes to Zecora for help, but the zebra can only tell her that they're doomed.

As Twilight rushes back to Ponyville, she spots the Princess already on her way from the castle. The town itself is a wreck, and the ponies are too panicked to be able to do anything about it. Just as Twilight starts to completely lose her mind, she hears a musical procession start up, and at its source is... Pinkie Pie!?

Before she can admonish Pinkie, Twilight notices that the parasprites have become entranced by the music, and begin to fall in line marching behind her. Meeting up with the rest of the team and following Pinkie, Twilight and the others rush ahead to greet the Princess, who just landed outside of town. Celestia is nonplussed to see Pinkie marching with the parasprites behind her, but is touched that they're holding a parade in her honor. Unfortunately, Celestia has to cut her visit short due to some sort of infestation in a nearby town. After Twilight gives her weekly report (that the answer to your problems may come from an unlikely source, even if it doesn't seem to make sense), Celestia heads off. The team checks with Pinkie, who finally tells them that she did know about the parasprites and their weakness to music from the beginning, but no matter how hard she tried to warn everyone, nobody paid attention to her. After Twilight and friends apologize to Pinkie Pie, they all head back to Ponyville victorious.

...or not, as the town is still a huge mess. WAH-WAH-WAH-WAAAAAH