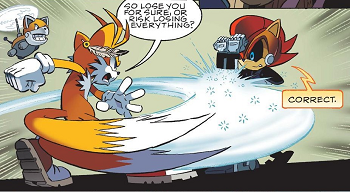 Tails used Tail Whip! The enemy Mecha Sally's defense fell!
"The user attacks by striking the target with its hard tail. It hits the target two to five times in a row."
— In-game description of the move Tail Slap, Pokémon
Advertisement:

There are reasons most vertebrates have tails. They can propel you through the water, free up your other limbs for multitasking, are great for balancing, can bait predator and prey alike, are good for showing your intentions, and they can swat flies. Why stop there? If it works on a small pest, why not a larger one? You may not have the thumbs necessary for cracking a whip or swinging a chain, but your tail can be just as good.

Prehensile Tails can be flexible enough to hit things, but not all of them are powerful enough to be effective deterrents. For added power, some tails have a weapon attached. See Beware My Stinger Tail for those. Also compare with Combat Tentacles.

Blanca uses her snake tail to Daoist and his mount.

Blanca uses her snake tail to Daoist and his mount.