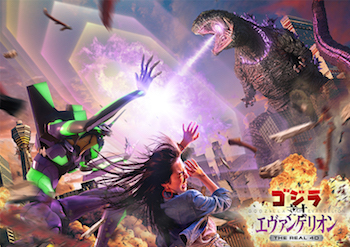 Godzilla vs. Evangelion: The Real 4-D was a crossover ride at Universal Studios Japan, between Shin Godzilla and Rebuild of Evangelion, that ran between May 31 - August 25, 2019, serving as a sort of follow-up to previous temporary attractions based on the two individual properties.

When a creature shows up in Osaka-III after defenses fail to stop him, NERV responds by sending out the Evangelions to head it off, believing it to be another Angel. Only once there, Shinji Ikari, Rei Ayanami, and Asuka Langley Shikinami discover that they aren't dealing with an Angel at all—but rather the King of the Monsters himself, Godzilla. However, soon they discover that there's a reason Godzilla is there, one having to do with a record amount of recorded lightning strikes and the disappearance of the Mahoroba asteroid probe.

Godzilla vs. Evangelion: The Real 4-D provides examples of: