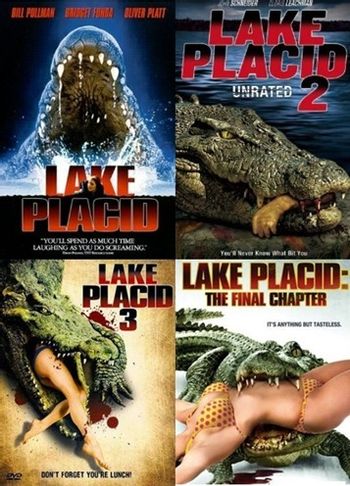 "I'm rooting for the crocodile. I hope he swallows your friends whole."
— Delores Bickerman
Advertisement:

Lake Placid is a movie made in 1999 combining comedy and horror and starring Bill Pullman, Bridget Fonda, Brendan Gleeson, and Oliver Platt with a plot revolving around a giant crocodile owned by a seemingly ordinary old woman, Mrs. Delores Bickerman played by Betty White.

It spawned five Made for TV sequels, the fourth of which serves as a crossover with Anaconda. A fifth was released in 2018, but is In Name Only, ignoring all previous films apart from a quick mention of the original.