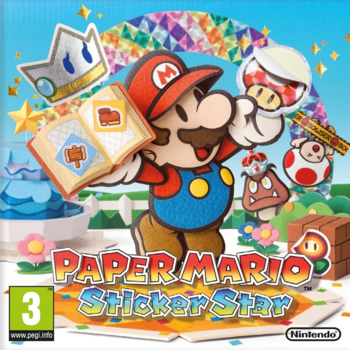 A Paper Mario game for the Nintendo 3DS, released on November 11, 2012 in North America. The game returns to the series' RPG roots, as opposed to Super Paper Mario's platforming-RPG hybrid approach, although it's not what you would expect with the first two Paper Mario games. The game makes use of the system's 3D effects, as expected on the system.

In this game, Bowser attempts to seize the power of the wish-granting Sticker Comet, but the Sticker Comet shatters and scatters across the land. With the help of the sticker fairy Kersti, Mario sets out to recover the 5 Royal Stickers and rescue Princess Peach, who has been once again kidnapped by Bowser, now empowered by the Royal Stickers. He must also use stickers he finds throughout the environment for battles and puzzle solving, which are stored on the bottom screen. Real-world objects, called Things, can be found and turned into stickers as well.