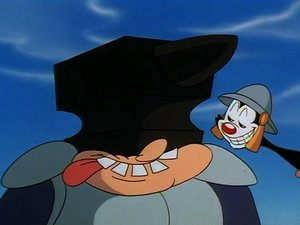 It doesn't hurt when you hit it, it hurts when it hits you!
Yakko: It's made of solid iron...
Dot: It weighs a ton or two...
Wakko: We know you'd like to meet it...
All Together: It wants to meet you too!
— Animaniacs, "The Anvil Song"
Advertisement:

The anvil: A simple, yet essential tool of any metalsmith, which serves as the workbench where metal is pounded into the desired shape for whatever project the smith happens to be working on.

These large objects must be made of a heavy, dense material in order to survive hammer blows, and as such they weigh a ton (though not quite literally, for the smallest ones anyway) and are invariably dropped from great height and are used to crush heads, though hands, feet and rib cages sometimes create soft landing spots. They may drop without warning, or they may be heralded by the Shadow of Impending Doom and the Bomb Whistle. The victim usually just has time to look up and see the falling object before it lands on him. Thankfully for the victim, as a slapstick trope, this is rarely ever fatal.

In some cases, especially if full-body crushing is desired, an n-ton weight may be substituted for the anvil. This is a metal weight shaped like a pyramid with the top cut off, a ring at the top for attaching a rope, and the exact weight (usually 1, 10, or 16 tons) painted in white on the front.note 16 tons was the heaviest weight commonly used for weighing things. Why 16? Because it had 8, 4, 2, and 1 junior brothers which allowed you to, between them, get any tonnage up to 31 tons with as few weights as possible, and weigh something up to 31 tons in as few rounds of moving those weights around as possible (neither being a trivial concern when dealing with objects weighing that much). The 16-ton weight was favored by Monty Python's Flying Circus. In cartoons, if the toon is driven completely out of sight, often a Cranial Eruption will shove the weight out of the way. Or, if the cartoon is very zany, the victim might have either the "NO SALE" eyes or Circling Birdies.

And once in a while, it's a safe. In those, occasionally the safe's lock whirls open and the character, who has somehow wound up inside the safe, falls out. Grand pianos are used as well, in which case the character will either end up inside where the strings are, or with a mouth full of piano keys for teeth. Another sometimes used option is for a tree or telephone pole to fall over on top of the character, repeatedly bouncing on their head and driving them into the ground like a piledriver. In anime, it's usually a washbasin.

Often results in an Accordion Man, Squashed Flat or Hammered into the Ground.

May have its origins in the real life practice of "anvil firing", which was used in America to celebrate the fourth of July: one anvil was laid upside down on the ground, a charge of gunpowder was placed in the hollow in the base, a fuse was laid leading out of it, and a second anvil was placed right-side-up atop the first. After everybody got far away and someone lit the fuse, they would watch the second anvil be launched high into the air, from which it necessarily had to fall back to earth. Obviously the real-life consequences of this trope place this FIRMLY in the category of Don't Try This at Home, as a falling anvil could easily kill a person in real life.

Not to be confused with Dropped a Bridge on Him. Anvilicious is unrelated conceptually, but we call it that for having the same amount of subtlety as the average anvil dropped on the average head. The anime equivalent is Drop the Washtub. If something more surreal than an anvil is used for the purpose, that's Drop the Cow.

Aardvark attempts to kill Charlie by crushing him with a boulder. When Aardvark is dumbfounded by Charlie making the boulder float by blowing at it, he tries it himself, but instead gets crushed.

Aardvark attempts to kill Charlie by crushing him with a boulder. When Aardvark is dumbfounded by Charlie making the boulder float by blowing at it, he tries it himself, but instead gets crushed.