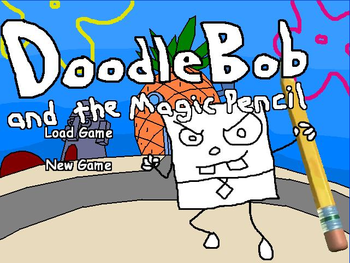 What happens if you take SpongeBob SquarePants, Drawn to Life and Mega Man and combine them all into one epic game?
Advertisement:

The result is this.

DoodleBob and the Magic Pencil is a fanmade PC game created by TechnoSuperguy, which is based on the episode, "Frankendoodle

", only for SpongeBob to catch him in the act. Unfortunately, as it turns out, Plankton has copied the pencil's data into all of his machines, allowing him to create as many doodles as he wants, and he then boots SpongeBob out of the Chum Bucket. He then creates four Special Doodles and sends them off to SpongeBob's friends, brainwashing them into rooting for him, and creates a lock to the Chum Bucket that can only be unlocked when said doodles are erased. Heading home, SpongeBob ponders on what he's going to do, but then he remembers DoodleBob, his doodle lookalike who tried to kill him, and frees him from the paper. Now a good guy, DoodleBob is assigned a mission by SpongeBob to bring his friends back to normal and foil Plankton's plan once and for all. Can DoodleBob complete his mission and save the day?

The game was later given a High Definition remake by Ethan Wake in 2019.