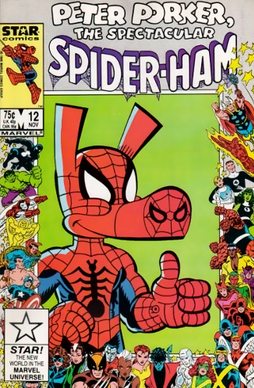 Debuting in a comedic one-shot comic entitled Marvel Tails in 1983, Spider-Ham was created by writer Tom DeFalco and artist Mark Armstrong as an animal-based parody of Spider-Man. Hailing from Earth-8311, Peter Porker is an anthropomorphic pig who actually began life as a common house spider who was bitten by a radioactive pig scientist after an atomic-powered hairdryer accident. Upon being bitten and transformed, he found that he retained all his spider abilities in addition to gaining the genius of scientist May Porker, who now believes herself to be Peter's aunt. After coming to terms with these changes, the arachnid-turned-pig decided to become a superhero and use these talents to fight crime. Spider-Ham proved popular enough to get his own series published by Marvel Comics subsidiary Star Comics, a short-lived imprint of the company focused on children's comics, with this solo series lasting for 17 issues and featuring back-up material starring anthropomorphic animal versions of other Marvel heroes. After that, Spider-Ham made a few appearances in Marvel Tales and humor magazine What The—?! before fading into obscurity during the 1990s.

Spider-Ham gained newfound prominence during the 2010s thanks to an unexpected cameo in the video game Spider-Man: Shattered Dimensions. He would return to comics as a supporting character in the Spider-Verse crossover event a few years later, after which he became a main member of the dimension-hopping Web Warriors team. The character's popularity was further bolstered by his cinematic debut in 2018's Spider-Man: Into the Spider-Verse, where he is transformed into a Looney Tunes-inspired character voiced by John Mulaney; Mulaney would reprise the role in Spider-Ham: Caught in a Ham, a short included as a special feature in the film's home release. At the tail end of 2019, he got a new miniseries, and in 2021, a graphic novel called Spider-Ham: Great Power, No Responsibility was released under Scholastic's "Graphix" imprint.