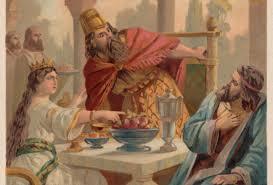 The Book of Esther tells the story of the titular heroine, a young woman who was taken to become a Persian Queen, while her cousin works in the king’s court. While there, a plot is made by the official Haman to murder all the Jews.

One of the fun and more exciting stories in The Bible, the events are commemorated by the uproarious festival of Purim, and the (surprisingly short) book is read in the synagogue that day at an atypically noisy session.

The Jewish and Protestant canon version of Esther is ten chapters long, with the tenth chapter ending at verse 3. The Vulgate version (which is based on the Greek) extended the story to about sixteen chapters, though these additions are interspersed into the original story in Catholic editions, bringing the chapter count back down to ten. It also changes the Persian king's name from Xerxes/Ahasuerus to Artaxerxes.

The story is the basis for the film One Night with the King, the VeggieTales episode "Esther: The Girl who Became Queen," and author Joan Wolf's romance novel The Reluctant Queen: The Love Story of Esther. It was also adapted into a politically charged Israeli film, titled Esther by Amos Gitai.

Tropes present in the story: