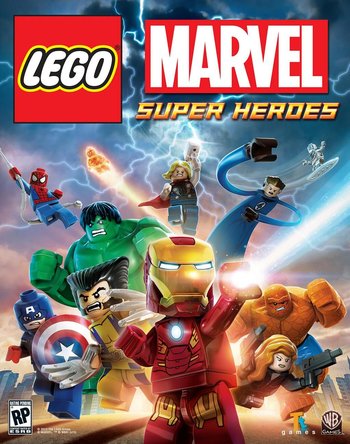 LEGO Marvel Super Heroes is an action-adventure video game and part of the LEGO Adaptation Game series, developed by Traveller's Tales and published by Warner Bros. Interactive Entertainment in 2013 for the PlayStation 3, Xbox 360, Wii U, PlayStation 4, Xbox One and Microsoft Windows, and published by Feral Interactive for OS X, as well as a handled port subtitled Universe in Peril for iOS, Android, Nintendo DS, Nintendo 3DS and Play Station Vita.

The plot features several Marvel characters, primarily the Avengers, Spider-Man, the X-Men and the Fantastic Four, battling a cabal of supervillains, led by Doctor Doom, as the two sides race across several iconic locations in the Marvel universe to acquire the Cosmic Bricks, the scattered pieces of the Silver Surfer’s board. As per LEGO game tradition, hilarity (and Stan Lee cameos) ensues along the way.