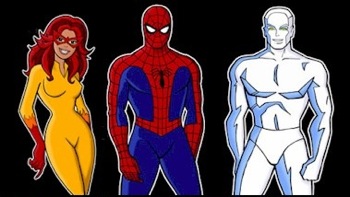 "Spider-Friends, go for it!"note From left to right: Firestar, Spider-Man, and Iceman
"Tonight, I, Electro, master of electricity itself, will let loose upon the world my greatest creation: Video Man, the creature from the game!"
— Electro, preparing to create the most memorable villain from the series, which ran during the '80s videogame craze
Advertisement:

This animated series, which ran from 1981-1983, was the second Spider-Man Saturday Morning Cartoon, and in the post-70s, the Marvel creative team decided to add new characters and send Spidey up against more than his own, regular Rogues Gallery. It aired originally on NBC (and for a while, paired up with the 1980s Incredible Hulk cartoon).

Bobby Drake (Iceman) and Angelica Jones (Firestar) were college students who lived with their friend Peter Parker (Spider-Man) in his Aunt May's home, which she was using as a boarding house. Thanks to a contribution from Tony Stark (Iron Man), their living space contained a Super Multi-Purpose Room complete with crime lab. They also had a pet dog named Ms. Lion.

Humorously redubbed footage of the show has been used in the Marvel Mash-Up shorts that air on Disney XD's Marvel Universe block. Currently, all but onenote "The Quest of the Red Skull" of the episodes are available to stream on Disney+.

In the Marvel Multiverse, it was originally listed as Earth-8107 before being retconned to Earth-1983, in reference to the year the show ended. A subsequent re-retcon gave the universe its old designation and turned Earth-1983 into the universe for the comic adaptation of Triumph of the Green Goblin.