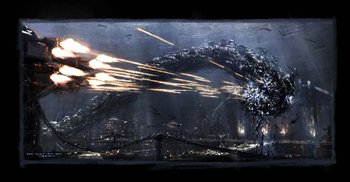 You are faced with a rather horrifying foe: not one big enemy, but rather a large swarm of enemies. What do you do? Do you run away? Do you pick up a weapon that can torch all the bastards at once?

Your choice, the wrong one at that: For some reason you decide to pick up a gun and start blasting at the swarm hoping to kill some members, but there's little to no success in doing so. Worse case scenario? You're dead. But if you have a weapon capable of dealing Splash Damage, then you may have a fighting chance.

People when in a situation like this will choose to try and do this for whatever reason, whether it's from an irrational fight or flight response or something else entirely, its just one example of a poor choice at its finest.

However, there is a chance that The Swarm has a type of Synchronization where if one member dies, usually a matriarch, the rest of the swarm will die

Putting it in trope terms, this is the Zerg Rush overcoming More Dakka.

Borders on Too Dumb to Live and may result from Did Not Think This Through. Subtrope of Quantity vs. Quality. Compare Shooting Superman.