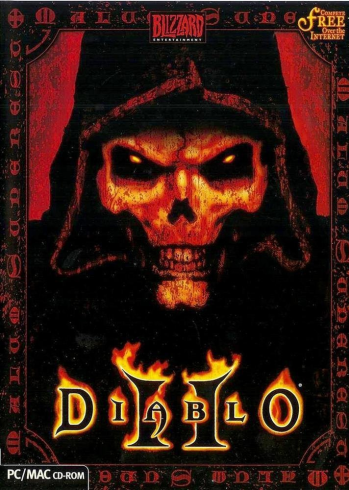 "Not even Death can save you from me."
"Why did I follow him? I don't know. Why do things happen as they do in dreams? All I know is that when he beckoned, I had to follow him. And from that moment, we traveled together, east. Always...into the east."
— Marius, opening cinematic
Advertisement:

Diablo II is the first sequel to the massively popular Diablo. It expanded the available characters to five (Barbarian, Amazon, Necromancer, Sorceress, and Paladin) and introduced many new features, including: a skill tree which gave players the ability to tailor their character(s) toward certain power schemes; the ability to add jewels and runes to weapons and armor to increase their abilities; the ability to craft items; new levels of weapon and armor rarity and quality; and many others. The game also greatly expanded the Diablo world. The action takes place in four Acts, set in the forests and fields around an abandoned monastery and temporary rogue encampment, the desert city of Lut Gholein, the jungle realm of Kurast, and in the depths of Hell itself.

Diablo II's plot revolves around the efforts of the Dark Wanderer (the corrupted hero of the first game) to reunite with the other Prime Evils and your character's journey to defeat the Prime Evils once and for all. The overall plot is loosely narrated by an elderly man named Marius, who follows the Dark Wanderer on his travels and sees the horrors he unleashes as Diablo increasingly gains control over him.

An expansion pack, Lord of Destruction, added a fifth act set on the snowy Mount Arreat, two new character classes (the Druid and Assassin), and allowed the game to play at an 800x600 resolution.

The next sequel, Diablo III, was released in 2012.

A remastered version, called Diablo II: Resurrected, was announced on February 2021 and released on September 23, 2021. It includes the base game and the Lord of Destruction expansion.