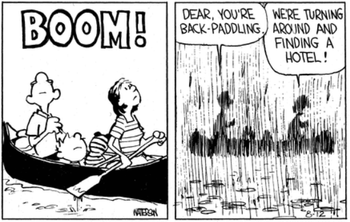 Weather in TV Land is weird. It strikes with no warning or buildup, and can stop just as suddenly. The most common example is a loud thunderclap, followed instantly by a drenching downpour (sometimes a single raindrop in between them). No wind, no sprinkling rain, nothing beforehand to warn our unsuspecting characters that they need to get indoors. Nor does it ever thunder without an accompanying downpour.

Some Truth in Television is used here; sometimes in real life when a storm arrives, there is wind and soft thunder but no rain, until there's a bright flash of lightning and loud thunderclap, and the rain starts as a downpour. An incoming storm may also bring a rapid increase in the density of the rainfall, starting as mere drizzle before the storm to a full-scale deluge afterwards. This isn't common in real life as it is in the media, though; most of the time, the rain comes first, then the thunder.

Often combined with Cue the Rain and When It Rains, It Pours. Contrast A Storm Is Coming.