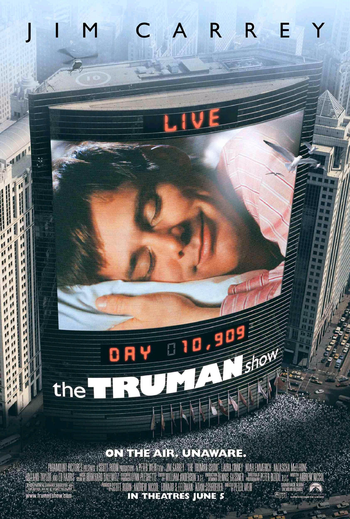 All Truman, all the time.
"We've become bored with watching actors give us phony emotions. We're tired of pyrotechnics and special effects. While the world he inhabits is, in some respects, counterfeit, there's nothing fake about Truman himself. No scripts. No cue cards. It isn't always Shakespeare, but it's genuine. It's a life."
—Christof, the very first lines of the film
Advertisement:

The Truman Show is a 1998 dark sci-fi comedy-drama film directed by Peter Weir, written by Andrew Niccol, and starring Jim Carrey, and is widely considered one of the best movies of all three's careers.

He still pines for a girl he fell in love with in college but who disappeared abruptly. Strange things have also been happening in his town: what looks like a spotlight marked with the name of a star falls out of the air right in front of him, his car radio picks up a broadcast which appears to be tracking his movements, and everything from his beautiful house to his beautiful wife to his loyal best friend seems somewhat... artificial.

When he bumps into a mysterious hobo who looks almost identical to his dead father, Truman begins to suffer a paranoid breakdown and sets out to fully investigate his environment. However, everyone around him tries in desperation to stop him from discovering the truth: Truman himself lives an artificial life.

Since before his birth, Truman has been the unsuspecting star of a globally successful Reality Show called The Truman Show, in which every minute of his day is filmed and broadcast live, overseen by the show's fanatical and obsessive creator/producer/director Christof (Ed Harris). While Truman has no idea about the level of deception everyone goes through to keep him in the dark, that changes soon enough...

Out of the many different reactions to the film, "what a good idea" seemed to top the list, at least with television executives. After Truman came out in 1998, the first series of Big Brother debuted in 1999, and Survivor premiered in 2000. Those initial "reality" shows seemed like a shocking idea at the time — but the people in charge ended up on the "right" side of history, as Reality TV of all kinds has captured a huge portion of the television viewing audience of later generations. On the other hand, the people in those shows volunteer. (Usually.) Also in 2000 came The Sims, which could also be described as The Truman Show: The Video Game.

A rare promotional video for the movie, which aired on Nick @ Nite, can be seen here

. It was filmed as a Documentary Episode and features in-universe interviews with the cast and crew.

The Honest Trailer for Free Guy notices some similarities with The Truman Show.

The Honest Trailer for Free Guy notices some similarities with The Truman Show.