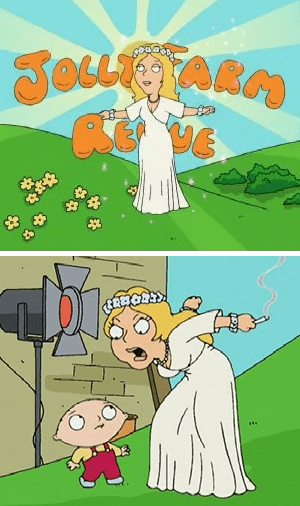 Princess Carolyn: I had just started working for Marv, so I went backstage to introduce myself.
BoJack: And then what happened?
Princess Carolyn: You told me you were too tired from pretending to be nice all night, and I needed to leave you alone.
— BoJack Horseman, "Best Thing That Ever Happened"
Advertisement:

There is an actor who is well-known for playing brave and courageous characters who are as good as it gets or playing characters who are sweet and easy-going. But off-camera, it turns out that they are not nearly as nice as they appear to be, when they start yelling at the rest of the cast, snapping at the director (in the sort of language their characters would never dare use) and proclaiming that they alone have the talent. When meeting with fans, they'll usually take on their nice character persona, but when alone they'll complain loudly about how much they hate their annoying fans. Hell, they might actually be genuinely nice, but the biz tends to bring out the worst in people pretty fast. And at the wrong time, too.

This is often used to give a message of not worshiping idols and raising false hopes. It is used to show the weaknesses and frivolities of show business and, funnily enough, considering the source, that just makes the message more interesting. People like to consider it knowledge from people who know what happens behind the curtain and take it as a knowing wink from the other side. Even if they're not really talking about their section of the industry.

Sadly, this type of encounter can lead to a Broken Pedestal moment for a character when they find out that their beloved idol is such a mean jerk, a bully, or even a predator.

Since this normally involves characters showing their true colors at a climactic point of a work, expect unmarked spoilers. Also, No Real Life Examples, Please! There are numerous gossip magazines and websites that delve into this exact thing, and celebrities are sometimes held to higher standards of "nice" than normal people; having a short temper on a stressful day of work can be spun into making one sound like a terrible person.