Series / Saved by the Bell: The College Years 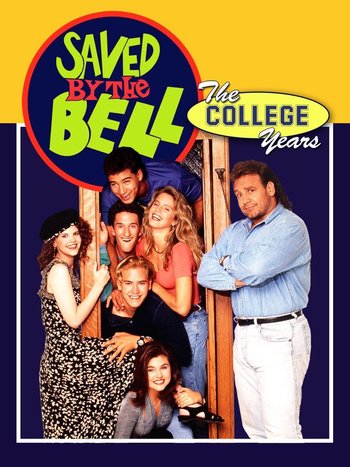 By the second episode, however, Danielle has transferred out of the dorm and familiar face Kelly (Tiffani Thiessen) transfers to the college and to the dorm, much to Zack's shock due to him pursuing Leslie and he soon realizing that he still has feelings for her. You pretty much know where it goes from here.

Unlike its predecessor, the series was aired in primetime on Tuesday nights. It ultimately ran from May 22, 1993 to February 8, 1994 and was canceled due to low ratings. The Series Finale movie, Saved by the Bell: Wedding in Las Vegas premiered later the same year in the Fall of 1994 culminating in (what else) Zack and Kelly's wedding day, whilst Screech returned to Bayside High as part of a work-study program during the second season of Saved by the Bell: The New Class.

These Tropes are standing at the edge of tomorrow...today!